We are pleased to announce LWVMA is an official sponsor of the Boston Youth Climate Strike, set for Friday September 20th! The Strike is being organized and led by youth and youth leaders are asking for our help. Please register to participate in the Youth Climate Strike on September 20th, share information about the Climate Strike and the event registration link widely within your networks, and stay tuned for more specific details as they develop!

The Strike is a global effort powered by youth of all ages from around the world, with hundreds of students striking on Fridays since March to bring meaningful attention and political action on the climate emergency confronting us. These youth are asking for our help as adults. LWVMA is doing its part to support their effort as part of the larger plan of action described below. 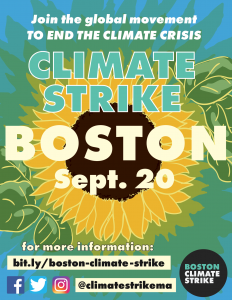 At the June LWVMA Convention, League members unanimously supported a Climate Emergency Resolution. To begin acting on the resolution, the LWVMA Environmental Action and Advocacy Committee developed a plan of action, approved by the LWVMA Board on July 26, 2019.

The plan, available here, sets two immediate goals of developing a detailed mobilization plan, including proposed actions at both the state and local levels, and developing a communications plan.

To meet the goals, the committee is offering seven specific actions for state and local Leagues to work on, including supporting the Global Climate Strike on Sept. 20, asking local governments to adopt climate emergency language, including climate emergency questions at candidate forums, and developing ways to raise awareness of the climate emergency issue within our membership and throughout our communities.

As part of the climate emergency action plan, the committee drafted Sustainable Practices Guidelines, available here, for the League at both the state and local levels to consider in their planning and operations.  The guidelines encourage implementation of zero waste and low-waste practices at League events.