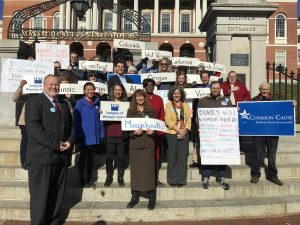 During the 2017-18 legislative session in Massachusetts,  LWVMA and our partners in the Election Modernization Coalition succeeded in bringing Automatic Voter Registration (AVR) to our state.

What Is Automatic Voter Registration?

AVR shifts voter registration from an opt-in system to an opt-out one. When eligible citizens interact with the Registry of Motor Vehicles or other state services agencies already charged with offering voter registration, they are automatically registered to vote unless they say no. They are notified by mail that they have been registered and can return that notification card to opt out or to enroll in a political party. It’s estimated that 15% of eligible citizens in Massachusetts are not registered.

Using modern technology to process registrations should make voter rolls more accurate and cost effective. Databases and opt-out procedures will ensure that only those eligible will be registered. Once someone is signed up, they remain registered when they move within their state. If someone is mistakenly registered, they will be not be penalized. And there is no record of citizens who choose not to be registered.

You can learn more about AVR by reading this Fact Sheet.

Where Has Automatic Voter Registration Been Adopted?

Automatic Voter Registration has already been approved in 13 other states (Alaska, California, Colorado, Connecticut, Georgia, Illinois, Maryland, New Jersey, Oregon, Rhode Island, Vermont, Washington, and West Virginia) and is working well in those that have implemented it. Oregon, the first state to implement the reform in 2016, added over 375,000 new voters to the rolls in the first 18 months and updated 265,000 inaccurate addresses in just six months. More than 97,000 new voters participated in the 2016 election because of AVR, resulting in a 4.1 percent increase in voter turnout—one of the largest increases in the country.

Oregon’s Secretary of State outlined that state’s experience with AVR in the November 2016 election in an article in The Hill in January 2017.

“The first year of program implementation has proven that this system is the most effective way to maintain accurate voter rolls while ensuring that only eligible voters cast ballots,” she wrote.

“The numbers in Oregon paint a picture of just how successful automated voter registration can be. Approximately 840,000 people were able to have their voter information either added or updated thanks to the new system. This number includes 270,000 eligible people who registered to vote and 570,000 people who had their records updated with new address information.”   Accurate address information is particularly important in Oregon, where citizens vote by mail.

What Happened in Massachusetts?

How did we get to this point?  Here is a chronology of our work over the legislative session:

Representatives of over 20 organizations testified before the Joint Committee on Election Laws hearing on the bill on June 8, 2017. LWVMA’s testimony on the bill is here. A coalition press release on the hearing is here.

On June 28, 2017, the Election Modernization Coalition hosted an AVR lobby day at the State House.  A coalition press release on the lobby day is here; lobby day materials and information are here.

In October 2017, at our annual Day on the Hill Lobby Day, LWVMA highlighted the AVR bill as priority legislation.

On November 9, 2017, after another low-turnout election, the Election Modernization Coalition renewed its call for AVR with a press event at the State House.

On January 31, 2018, the Election Modernization Coalition hosted a second AVR lobby day at the State House, where Attorney General Maura Healey joined hundreds of citizens and dozens of organizations in urging the legislature to pass AVR as soon as possible this session. Teachers, veterans, environmentalists, immigrants, and union members were among those who came to the State House from all over to state to support AVR.

In February 2018, the Joint Committee on Election Laws favorably reported out the AVR legislation that will help make our voter registration system more accurate, secure, and inclusive.

In March 2018, Secretary of the Commonwealth William Galvin endorsed the bill at a State House press conference with LWVMA and our coalition partners.

On June 27, 2018, the Massachusetts House passed Automatic Voter Registration (H. 4667) with a bipartisan vote of 130-20.
LWVMA and its partners sent a letter to all of the Massachusetts Senators urging passage of the AVR bill. The MA Senate unanimously passed the AVR bill, now H.4671, on Thursday, July 12.

What’s Happening at the National Level?

In mid-June 2017, an AVR bill was introduced in Congress by Senator Patrick Leahy (D-VT) and Representative Robert Brady (D-PA).

“This bill will improve the accuracy of voter records, cut down on costs, and modernize outdated registration systems, while supporting states in implementing these updated systems,” said Chris Carson, president of the League of Women Voters. “The League has advocated for online and electronic voter registration for many years, and we are pleased to see Congress recognizing these technologies.

“This legislation is especially important for young people.  Eighteen to 24-year-olds only have a voter registration rate of about 55-percent, compared to the 70-percent rate for all voters of all ages, races and ethnicities.  By employing the latest technologies – the technologies that young people are familiar with – this legislation will bring voter registration into the 21st century,” Carson said.