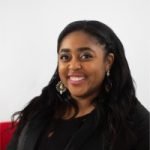 Courtney Henderson is a political strategist, community leader and advocate for the youth in the South Shore area of Massachusetts. Since her move to Massachusetts back in 2016, Courtney has organized workshops for women with the Brockton Area Branch NAACP as well as organized symposiums and community events with the South Shore chapter of Sigma Gamma Rho Sorority, Inc. Not only is Courtney a leader for the Women in NAACP (WIN) Committee, but she also serves as the Vice President and Social Action Chair for her local chapter of Sigma Gamma Rho. Courtney is the Founder & CEO of Develop & Empower Consulting LLC, a campaign management and public relations boutique firm.

Before her interest in women and youth, Courtney focused heavily on political issues such as voter participation and voter suppression. She has 6 years of experience working on campaigns and policy analysis.