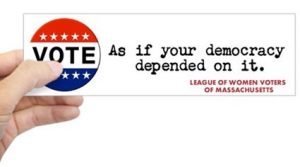 Professor Daniel Ziblatt, co-author of How Democracies Die, speaking at our April conference, warned that the norms and institutions of our democracy are under threat, and that our partisan environment is softening “the guardrails of our democracy.” That image of the car fishtailing into the guardrails and then veering off the road has stayed with me these last few months, and most acutely during these last two months and the events leading up to the November mid-terms. Maybe some of you have thought of it too.

A report last month from a bi-partisan National Task Force on Rule of Law and Democracy, assembled by the Brennan Center, used some of the same language. “The values that undergird American democracy are being tested. . . Our republic has long relied not just on formal laws and the Constitution, but also on unwritten rules and norms that constrain the behavior of public officials. These guardrails, often invisible, curb abuses of power.”

In such a climate, where the norms and guardrails are being tested, the role of the non-partisan League of Women Voters is crucial. Voters are eager for information and opportunities to meet candidates of all parties. Our Voters’ Guide, InformedVoterMA.org, offers information about candidates and about the three statewide ballot questions. Throughout the primary and general election season, Leagues throughout the Commonwealth have sponsored candidate events.

At the same time, as an organization we believe in the rule of law and need to support our democratic institutions from attacks. Our positions demand that we take action. While others sometimes argue that our advocacy is “supporting a candidate or party,” we emphasize that we act on positions, and our non-partisanship means that we neither support nor oppose candidates or parties. When we stand up for women’s rights, immigrants’ rights, the right of everyone to affordable health care and the right of everyone to a clean and safe planet, we are acting on positions that League members have studied and affirmed over the nearly 100 years of our history.

In the end, the most powerful thing we can do is VOTE, and make sure everyone in our family, neighborhood, and community votes as well. The LWVMA’s latest bumper sticker says it all for me: Vote as if your democracy depended on it. Please make a plan to vote on November 6, and encourage everyone you know to do so as well. It will be the best way to strengthen the guardrails and keep us all safe.