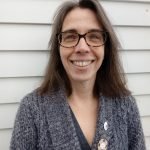 Judith Reilly joined the League as a founding member of the LWV Salem Unit (2018) and is currently finishing her term as the Salem League’s first Voter Services & Civic Engagement chair. She is a native New Yorker who loves her adopted home of Salem. A mid-life career-changer, she earned AS, BS, and MBA degrees from Johnson & Wales University and has worked for 12 years as a performance auditor for a federal agency. Prior to moving to Massachusetts, she was active in a Providence, Rhode Island social justice organization. She has a passion for open government and filed about a dozen successful open meetings and access to public records complaints in Rhode Island, leading to redress by the government entities.