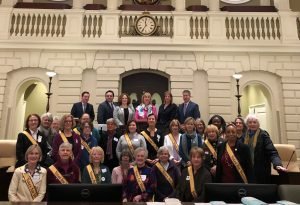 The League of Women Voters of Massachusetts celebrated the 100th anniversary of the founding of the voters’ rights organization Thursday, Feb. 6, at the State House.

Speaker of the House Robert DeLeo; Sen. Joan Lovely, assistant majority leader; and Rep. Patricia Haddad, speaker pro tempore, saluted the League, whose national organization began in February 1920, six months before the ratification of the 19th Amendment to the Constitution establishing women’s right to vote. The League of Women Voters of Massachusetts was started three months later, in May 1920.

The Massachusetts League is asking the legislature to honor these centennials by passing Election Day registration, a voting reform already in place in 21 states.

“In these challenging political times, organizations like the League of Women Voters are crucial to maintaining democracy and keeping elections fair,” said DeLeo. He cited the work the legislature has done passing a pay equity bill, the pregnant workers fairness act, and an $8 million funding bill for women’s reproductive health organizations to offset federal cuts.

Sen. Lovely noted the gains women have made, but pointed out that only 197 women have served in the Massachusetts legislature in its history, compared to 20,000 men.

“The League of Women Voters continues to help us make significant strides toward equality,” she said.

Rep. Haddad honored the League with a joint resolution from the House and Senate, recalling League members in her childhood “were the first time I realized women could organize and get things done.”

Acknowledging Speaker DeLeo’s comment that the current House has more women in leadership than ever before, Rep. Haddad added, “it’s still a small number compared to the men.”

She challenged her audience with the question, “Are we still working as hard as the women who won the vote did 100 years ago?”

The State House celebration was part of the League’s nationwide day of action, “Women Power the Vote.”

“The League was founded by suffrage leaders 100 years ago to help American women exercise their new right to vote,” said Mary Ann Ashton, co-president of the Massachusetts League. “We’re celebrating by joining Leagues across the country in demonstrating the power of women to achieve a more perfect democracy.”

“We’re honoring our history by taking action for the future,” said Judy Zaunbrecher, co-president of the Massachusetts League. “Our founders achieved the impossible by getting the 19th Amendment passed. We continue their fight by working to improve voter access, including Election Day registration in this session of the legislature, and advocating for such reforms as automatic voter registration, early voting, and online registration in the recent past.”

“For 100 years, Leagues have registered voters, informed their communities on the issues, advocated in their legislatures, and helped shape their communities and this country,” said Chris Carson, president of the League of Women Voters of the United States. “It is fitting that we celebrate this milestone with a coordinated day of the kind of grassroots activism our members and supporters have embraced for an entire century.”

The Massachusetts League represents 47 local Leagues across the state, from Cape Cod to the Berkshires, with about 3,500 members.