ance Study Committee was created soon after the 2013 LWVMA Convention approved a study of this issue (May 2013). It has members representing 18 Leagues across Massachusetts. After conducting interviews and researching the topic, the Committee prepared materials for educating our members and the general public.

These tools were developed by the Campaign Finance Study Committee of the League of Women Voters of Massachusetts. To contact the Committee, email moneyinpolitics@lwvma.org.

The Democracy in the Balance presentation is available in a full, 30-minute version, which is the recommended version to use. Each presentation can be viewed as a powerpoint show (.ppsx), with an accompanying script, or as a narrated version, available as a YouTube video. Brief guidelines for use are also included.

30-Minute Presentation: Democracy in the Balance

Presentations are currently under construction. Please check back again shortly.

During the past year, the Study Committee focused its efforts on bringing this national issue to the 2014 LWVUS convention, with the goal of garnering support and action with League members across the nation. As part of LWVUS Program Planning for this convention, LWVMA asked local Leagues throughout the US to recommend a review of the LWV position on campaign finance in light of U.S. Supreme Court decisions over the last 40 years. Recognizing the strong concern throughout the nation, local Leagues responded and the LWVUS board adopted our recommendation as part of the recommended 2014-16 Program, which was adopted by the convention delegates. 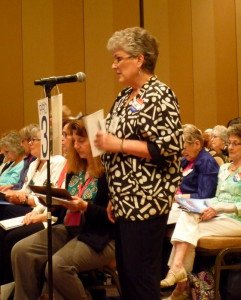 To reinforce the urgency of taking action on these issues, the LWVMA and the CFSC submitted a Resolution for Convention 2014 that expressed the need for a fast-tracked and dynamic study and review of the LWV Position on Campaign Finance, coupled with the proposed study of the Constitutional amendment process and the review of the redistricting process for Congressional districts, that will propel concrete, action-oriented outcomes. The resolution was approved by the convention delegates. There were two opportunities to join LWVMA for discussion of grassroots advocacy for campaign finance reform and the LWVMA resolution. Click here for a flyer. LWVMA distributed 700 buttons, 100 people attended the June 6 caucus, and 200 attended the June 9 workshop where the toolkit materials were presented. Caucus (LWVMA) 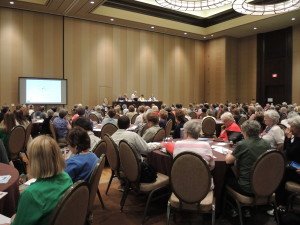