We thank the Board members who complete their terms on June 30, 2022: Amy Smith (2nd Vice President), Judith Reilly (Director), and Vedna Lacombe-Heywood (Director.) Their years of dedication and leadership have strengthened LWVMA. We appreciate their service.

Direction was provided to the new Board via the chat function in Zoom. If you would like to provide direction (a specific program item, project, or about the management and goals of LWVMA), please send it to  lwvma@lwvma.org . The newly elected Board will review this direction and report back to the membership on the actions taken.

After the business meeting was adjourned, Ellen Clegg, former Editorial Page Editor of The Boston Globe, and Northeastern University Professor, Dan Kennedy, discussed the collapse of community journalism and the path forward to ensure citizens have access to information. You can view their presentation here and read more about them below.

On behalf of the LWVMA Board, we look forward to working with you over the next year to empower voters and defend democracy for all. 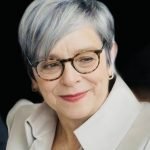 In a journalism career that spanned more than three decades at The Boston Globe, Ellen Clegg held a variety of senior editing positions in the newsroom, including Page One Editor and Editorial Page Editor, where she oversaw the Editorial Page, the Op-Ed Page and the Sunday Ideas section. During her tenure on the Editorial Page, staff members won the Pulitzer Prize for Editorial Writing and the Pulitzer Prize for Commentary. Now an affiliated faculty member at Northeastern University’s College of Arts, Media and Design, she is collaborating with Professor Dan Kennedy on a book about the future of community journalism, “What Works: The Future of Local News,” (Beacon Press, 2023.) Clegg and Kennedy have launched a website (WhatWorks.news) and a weekly podcast to share their reporting and research. Clegg, who has written widely on the life sciences and the intersection of public health and public policy, is the author / co-author of two previous books, ChemoBrain (Prometheus Books, 2009) and The Alzheimer’s Solution (Prometheus Books, 2010, with Dr. Kenneth Kosik).

Dan Kennedy is a professor of journalism at Northeastern University and a nationally known media commentator. He is the author of two books on the state of media, The Wired City: Reimagining Journalism and Civic Life in the Post-Newspaper Age (2013) and The Return of the Moguls: How Jeff Bezos and John Henry Are Remaking Newspapers for the Twenty-First Century (2018). A third, What Works: The Future of Local News, to be co-authored with retired Boston Globe journalist Ellen Clegg, will be published by Beacon Press in 2023. Clegg and Kennedy co-host a podcast, also called What Works, that can be found at whatworks.news. A contributor to GBH News, Kennedy is a panelist on Beat the Press with Emily Rooney, a weekly media program that was broadcast on GBH-2 from 1998 to 2021 and is now an independent podcast. His blog, Media Nation, is online at dankennedy.net.