Monday April 13th: Pricing Carbon to Combat Climate Change: What Can We Learn from British Columbia?

British Columbia is coming to Massachusetts! British Columbia’s Minister of Environment, the Honorable Mary Polak, will be the featured speaker at the MIT forum: Pricing Carbon to Combat Climate Change: What Can We Learn from British Columbia. 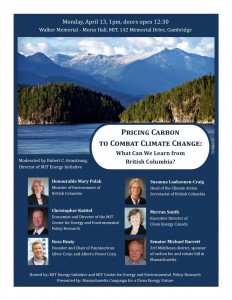 LWVMA is supporting carbon pricing for Massachusetts again this legislative session and is now formally part of the growing coalition in the state to make this happen, starting with the visit of BC’s top government officials for the launch of the campaign.

British Columbia is proof positive that a carbon fee and rebate policy can work!

Since 2008 and the enactment of carbon pricing in BC, their economy has grown at a higher rate than other provinces in Canada, emissions have decreased, and the political party that passed the bill has been re-elected… twice! This is a true success story.

On April 13, the Minister of Environment, and a delegation of policymakers, business leaders and advocates from British Columbia are coming to Boston to tell us how it worked – and how it could work here.

Learn all about it by joining LWV members from across the state and others at 1:00 PM at MIT’s Morss Hall, Walker Memorial.