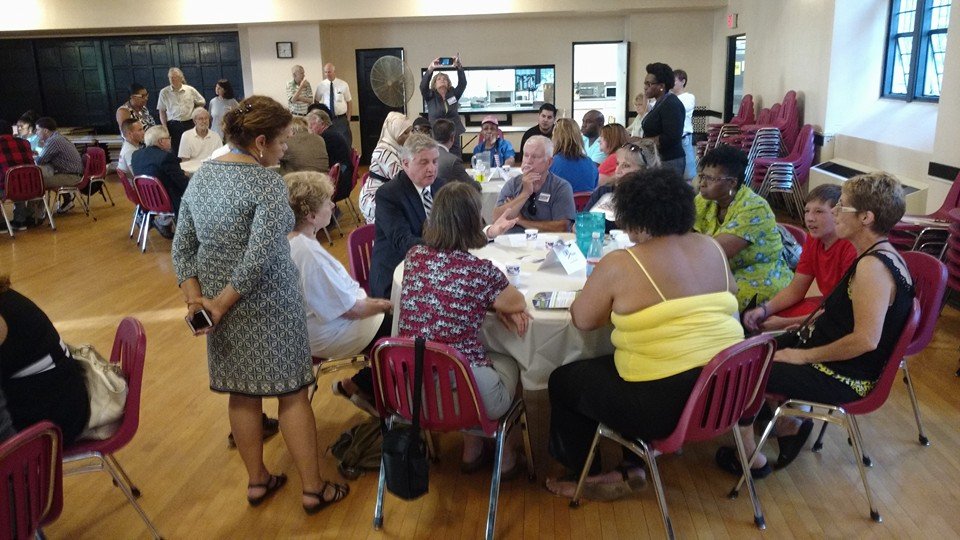 The Springfield Unit of the League of Women Voters of the Northampton Area took an innovative approach to candidate events in the September state primary election: “Candidating 2016,” borrowing techniques from speed-dating. In the words of one participant: “This format was the best I’ve ever seen. The candidates seemed to give their personal bests, and the voters were comfortable. Thumbs up!”

The idea for “Candidating 2016” developed as we observed candidate forums and meet-and-greet events held by city party committees and civic groups. We noted several things: Forums relied on moderators and media pundits. Audiences were largely the already politically engaged. Candidates mostly didn’t move beyond rehearsed campaign talking points. Most audience members were passive. In contrast, we appreciated the less structured, more personal nature of meet-and-greets, but small ones featured only one or two candidates. In large groups, contact was too brief to form more than a surface impression.

And, critically, these events were not attracting a diverse cross-section of Springfield’s multi-racial, multi-ethnic community, and few young voters joined in.

Could we do better? Could we devise a compelling format that would attract not only the politically committed but also folks who felt a lack of unbiased information and time to educate themselves on the candidates?

Hotly-contested primary races for Sheriff and Governor’s Council presented an opportunity to try.  The goal was a format in which a diverse group of informed voters could actively engage with candidates for mutually meaningful, up-close-and-personal political discourse.

Speed-dating is a popular method of engaging many people with each other in a short time. In a personal matchmaking setting, participants gather, pair up, converse for a set period then change partners on cue.  In our political matchmaking, the eight candidates made brief opening statements and then deployed, one each, to eight tables where eight separate groups of voters were seated with League facilitators. After nine minutes — ticked off onscreen via an online stopwatch — we rang a bell and the candidates rotated to the next table.

The novelty of the format was, in itself, quite stimulating — and an occasion for much laughter. But we also enriched the experience with content. We began the event with an overview of the offices and issues. We developed questions facilitators could use to focus the discussion and keep the conversation moving, if needed. It was rarely needed. Voters dove right in, and it was tough to tear the candidates away when the bell rang.

Our success in attracting a diverse and active audience lay not only in the format but in was community partnership and outreach. We partnered with both grassroots social justice advocacy groups Neighbor to Neighbor and Voices from Inside as well as the Women’s Fund of Western Massachusetts in a robust social media promotion to reach an audience often unreached by mainstream communications.

Bottom line, as one participant posted on Facebook: “Here’s a novel idea. Voters — left, right, middle, undecided — sit around together discussing issues with each of the candidates running, regardless of affiliation. No barriers, no borders. Inner-city with suburb. People of color and not. Women, men, whoever. Christians, Jews, Muslims. Together. Way to go #LWVMA.”