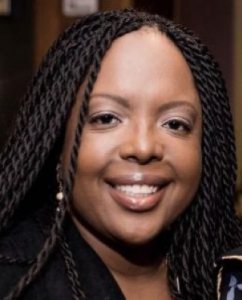 Vedna joined her local Plymouth Area League in early 2018 and served on the Board on the Voter Services Committee from 2018-2021.  In 2020, she joined the LWVMA Board of Directors serving as the co-chair of Diversity Equity and Inclusion Committee.  She helped draft the Social Justice Resolution for LWVUS which was adopted in 2020. In January of 2021, she became a member of the LWVUS Advocacy and Litigation Committee.

Vedna is a surgical trauma ICU nurse at Brigham & Women’s Hospital. She has served on several boards and committees on the local and state level and is currently an elected School Board member for the town of Plymouth.

“Today’s ruling strips women and those who may become pregnant of their bodily autonomy and will have devastating — and immediate — consequences across the country. While the Court’s opinion was expected, its harm is extreme and real. When women and those who can become pregnant can no longer make reproductive decisions for their own bodies, they are no longer equal individuals in our democracy. This harm will exacerbate societal inequalities and fall disproportionately on people of color and low-income communities already facing egregious obstacles to health care.

“The decision foreshadows the erosion of other well-established Constitutional rights including marriage equality, access to contraception, and the right to engage in private, consensual intimate conduct.

“The dissenting Justices get it exactly right: today’s majority opinion is an assault on the constitutional guarantee to equal protection of the laws and the right to due process. With this decision, BIPOC, LGBTQIA+, and other historically marginalized communities have no guarantees that their civil rights will be protected.

“The League of Women Voters stands in our power with our reproductive partners and all persons who fear the dangerous consequences of this decision. We will use our anger to fight in the legislatures, in the courts, and in the streets. We call on our elected leaders at the state and federal levels to act swiftly to restore bodily autonomy to all people.

“Women hold the power to create a more perfect democracy. We will not stand by as constitutional rights are stripped away, one by one. Women’s rights are human rights, and we will continue to fight until the right to abortion is restored. Our lives depend on it.”

“The League of Women Voters filed an amicus in the case of Dobbs v. Jackson Women’s Health Organization. Learn more about the case here.

Youth Voters for a Thriving Democracy

The impact of youth voters in past elections has been shown by the   League of Women Voters of Maine and Tufts’ CIRCLE Center for Information and Research on Civic Learning & Engagement). See presentation here. If you are interested in doing a postcard campaign to youth voters, email Jen Goldman, LWVMA voter engagement committee, for a copy of the campaign.

Voting rights advocates, public interest groups and a network of state and local organizations praised the legislation signed by Governor Baker today. The bill, An Act Fostering Voting Opportunities, Trust, Equity, and Security or the VOTES Act, is the largest expansion of voting access in the Commonwealth of Massachusetts in years. The House and Senate passed the final version of the bill last week.

The VOTES Act will make several permanent changes to Massachusetts’ election laws, including: allowing voters to vote by mail without an excuse; expanding early voting options; making sure that eligible voters who are incarcerated are able to request a mail ballot and vote; ensuring that the Commonwealth joins the 30-state Electronic Registration Information Center (ERIC) to keep voter registration rolls up-to-date; and more. The bill also reduces the voter registration deadline prior to an election from twenty days to ten.

“We are thrilled that Governor Baker signed the VOTES Act into law today. We’d like to thank Governor Baker, Senate President Spilka and Speaker Mariano for making voting rights a priority this legislative session,” said Geoff Foster, Executive Director of Common Cause Massachusetts. “At a time when many states are making it harder to vote, this new law will modernize our elections and make our democracy more accessible and equitable.”

“We are proud Massachusetts is actively supporting voters and appreciate the Governor signing this bill,” said Patricia Comfort, Executive Director of the League of Women Voters of Massachusetts. “We expect voters to use the mail and early voting options as soon as the Sept. 6 primary election.”

“Voters embraced mail-in voting and expanded early voting in 2020,” said Beth Huang, Executive Director of the Massachusetts Voter Table, “Now that the VOTES Act is law, we will educate voters, especially in communities of color and working-class neighborhoods, about these permanent expansions of voting rights.”

“Voting is the foundation of democracy; it is the right we exercise to protect all others,” said Carol Rose, executive director of the ACLU of Massachusetts. “Across the country, voting rights are in peril, but Massachusetts is charting a different course. We applaud Massachusetts policymakers for strengthening our democracy and advancing these crucial voting reforms.”

“Whatever sport you’re following right now, signing this bill is a home run, a slam dunk, or a hole in one. All of us win when voting is made more accessible and that’s what the VOTES Act will accomplish,” said Janet Domenitz, Executive Director of MASSPIRG. “Our thanks go out to Governor Baker for turning this act into law.”

“We are overjoyed that Governor Baker has signed the VOTES Act into law,” said Vanessa Snow, Policy and Organizing Director at MassVOTE. “Policies included in the VOTES Act, like permanent mail-in voting, expanded early voting, and jail-based voting reforms, will increase accessibility and equity in our elections. We of course wish that Election Day Registration was included in this version of the VOTES Act, but we will continue to fight tirelessly for the reform in the years ahead. We thank Representative John Lawn and Senator Cindy Creem for filing the VOTES Act, as well as Senate President Spilka, House Speaker Mariano, and Governor Baker for supporting the bill.”

LWVMA and our coalition partners wrote a letter to the New England Governors to express our strong support for a joint solicitation by the New England states for transmission solutions to deliver offshore wind to the region. Read the letter here.