Tune into Voting Rights – The Struggle to be Counted

Each Sunday evening at 7:00 p.m., Phil Portlock, a Washington D.C.-based photographer, film producer and voting rights activist, screens his 25-minute documentary about the history of African American voting rights in the United States and the continuing threats to those rights.  Click here for the zoom link and here to a Washington Post article about the film maker and the film.

The League of Women Voters of Massachusetts celebrates several major legislative victories during the 2021-2022 formal legislative session, which ended July 31, 2022.

Improved election laws are always a key League priority, and passage of the VOTES Act continued our success in this area.  The VOTES Act made reforms permanent that were put in place for the 2020 elections to deal with pandemic issues.  Those reforms include unrestricted voting by mail, expanded early voting, and reducing the cutoff for voter registration from 20 days to 10 days before an election.  This law also helps election officials by allowing them to process ballots received before Election Day and widens the pool of potential poll workers.  It requires that eligible incarcerated citizens have access to voting.  Massachusetts will also have to join the Election Registration Information Center (ERIC) to clean up its voter rolls.

Same-day voter registration was dropped from the VOTES Act, but we will be back next legislative session with a bill to get that done.

The legislature’s final climate bill was based on an offshore wind bill, and incorporated provisions from several additional, separate bills that the League supported. The law expands use of offshore wind energy, promotes clean energy development, and strengthens the electrical grid. This powerful law has garnered national recognition as one of the most ambitious and transformative laws in the nation, placing Massachusetts at the forefront of states working to achieve an equitable clean energy future.

Following the U.S. Supreme Court’s overturn of Roe v. Wade in June, the legislature and the Governor worked quickly to codify additional reproductive rights and protect abortion providers in the state.  The bill that passed included provisions from other bills we supported to provide access to a full spectrum of pregnancy care and to make medication abortion available at public universities.

We backed the bill to provide drivers’ licenses for undocumented immigrants in Massachusetts, which passed over the Governor’s veto.  A November ballot question effort to repeal that law is under way, and it looks like the repeal will be on the ballot.

The Common Start bill, to greatly increase funding and support for child care and early education, passed the Senate but stalled in the House.  The budget, however, established a first year “down payment” on this bill by including more than $500 million in new early education funding.

The legislature punted on a bill to require that public meetings which are subject to the open meeting law include the ability to attend and participate remotely, as adopted during the pandemic.  Instead, the legislature extended the deadline for a decision on remote access from July 15, 2022, to March 31, 2023, so the League will be actively advocating for that access early next session.

A number of other bills we supported came close but did not make it over the finish line by July 31.

A major bill to address disparities in the delivery of public health services, including ensuring minimum public health standards for every community, creating a uniform data collection and reporting system, and establishing a sustainable state funding mechanism to support local boards of health and health departments, passed and was sent to the Governor, who returned it with amendments after the formal session adjourned.  There may be additional action on this bill if the legislature reconvenes.

Provisions in some bills were included in the huge economic development bill that was in conference committee as the session ended.   The legislature may reconvene to deal with this important bill, so these League-supported provisions–an improved earned income credit for working families and sealing records of eviction notices and actions (the HOMES act)—may still become law.

Two measures passed the Senate but were not reported out of the House Ways & Means Committee:  free access to menstrual products in prisons, homeless shelters and public schools; and age-appropriate and accurate sex education in schools.  Measures to regulate face recognition technology and to increase the conservation land tax credit were attached to a bond bill in the House but rejected by the Senate.

A bill to protect open space with stronger regulations including identification of replacement land was stuck in a conference committee as the formal session ended.

Gun law reforms were under discussion at the end of the session, and Speaker Ronald Mariano has indicated a major omnibus gun control bill will be introduced next session.

These bills that came close, and other bills that did not get to the floor for a vote, cover positions important to the League, and our legislative specialists will be working on them again when the new session of the legislature convenes in January 2023.

You can view the presentation by Michelle Tassinari, Director of Elections in the Secretary of State’s office, below. Michelle offered a lot of great information and suggestions for how League members might help during this election season.

Review our collective accomplishments in advocacy and activism, elections and voting as well as democracy education. Click here for the FY21 LWVMA Annual Report. As we reflect and take stock, we thank you all for everything you do to defend democracy and empower voters every single day! 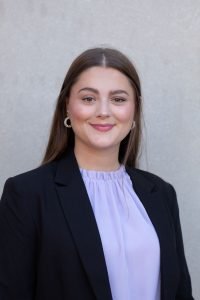 We’re pleased to welcome Lily Sweeterman, who has taken over for Taylor Grenga (Taylor begins law school at Northeastern this fall) as LWVMA’s Administrative & Program Assistant.  An Ohio native, Lily is a recent graduate of the University of Dayton, where she majored in Criminal Justice Studies and Sociology.  “The League of Women Voters has so much history, and I’m so excited to begin working with an organization full of passionate people like myself!”  Lily can be reached at lsweeterman@lwvma.org  or by calling the main office number 857-452-1715.