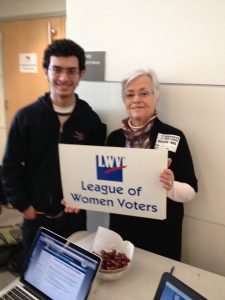 By Vicky Coccoluto and Susan Woodward
LWV of Winchester

The Winchester League has taken a new twist on high school voter registration, using computers for online registration. The League also expanded its efforts to a fourth high school, in Medford.

Winchester’s online registration effort began last fall when Chris Kuang, president of the Student Council at Winchester High School, reached out to LWV Winchester.  He knew the League had done voter registration in the past, and felt this year, with the presidential election, it was especially important to register students.  We followed up with a meeting with the principal, our town clerk, Chris, and two League members.

Preparing for the voter registration on January 14, we coordinated with the principal and the student council.  We set up four tables and ten chairs in the school cafeteria.  The librarian loaned us nine Chrome laptops.

The principal and Chris promoted the event with an online weekly newsletter and daily announcements during the week before we arrived on campus.  Since it was so well publicized, the students lined up immediately at the beginning of first lunch.  Student council members and League volunteers assisted students with any questions. This was the first time we had assistance from the student government and that helped with the process; those students were visible and well-prepared on registration requirements.

Many students were happy to use the new Massachusetts online registration site, which is very efficient.  The students logged on to fill in the necessary information.  To use the online site, they needed a Massachusetts driver’s license.  Students who didn’t have a license could fill out a paper form.

The new online registration was a real hit with the students!

The Winchester town clerk confirmed 124 new voters, our highest figure to date for a one-day event.

The Winchester League has registered eligible students at schools in neighboring towns for several years, beginning with Woburn ten years ago, and Stoneham more recently.  This year, we decided to expand to Medford High School, also in a town without an active League.

This year seemed a particularly auspicious one to emphasize voter services for young people:

We started with a call to the Registrar of Voters at Medford City Hall. That office agreed to a cooperative effort if the League took the lead in making the arrangements with the school. Fortunately, one of our members, a teacher in the Medford system, referred us to the head of the Humanities Department, who was very supportive, and in turn connected us with the lead Social Studies teacher and a faculty counselor.  Both were enthusiastic about a voter registration drive, and arranged for the tables, chairs and laptops we would need.

While the February 26 date for the registration drive was after the primary registration deadline, it did capitalize on an event that day at the school:  an energetic mock Presidential debate, featuring talented student impersonations of the national candidates.  Faculty speakers gave pep talks on voting and announced that the “League of Voters” was at the school to register eligible students to vote.

One of the rewards of extending our reach to Medford, aside from witnessing so much student interest in civic activity, was the thanks of the attending city officials, who said the 50 or so registrations compared very favorably to earlier efforts.